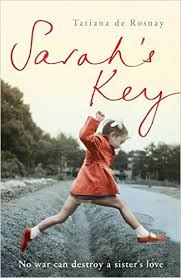 Sarah’s Key by Tatiana de Rosnay is a dual narrative containing both factual history and fiction. I found it to be a heart-wrenching, absorbing, emotional and informative book about the darkest time in France’s history - the Holocaust.

Paris, July 1942. Sarah Starzynski is ten years old when she and her parents are arrested by the French police. Before leaving, Sarah secretly locks her younger brother, Michel, in their childhood hiding place, a cupboard in the family's apartment. She pockets the key and promises him that he will be safe and she will return in a few hours to let him out. They are then taken to the Vélodrome d'Hiver as part of the Jewish roundup.

Paris, May 2002. Julia Jarmond is a journalist and on 60th anniversary of the Vel’ d’Hiv roundup, she is asked to write an article about this bleak event in France's history. Shockingly she discovers that this cruelty is mainly carried out by the French police. Through her investigations, she stumbles upon a trail of long-hidden family secrets that connect her to Sarah. Julia is compelled to retrace the girl's ordeal, from the atrocity of the Vel’ d'Hiv roundup, to the camps. Julia probes into Sarah's past, travelling from France to America and Italy searching for answers. Her search for answers leads her to question her own place in France and to reassess both her marriage and her life.

Sarah's Key is a disturbing, enlightening and touching, with well-developed characters. Tatiana de Rosnay offers her readers a subtle yet compelling portrait of France under occupation during WW2 and she reveals the taboos and silence that surround this painful episode.
Posted by Angela Barton at 08:16 2 comments: