Take A Step Back

Sometimes you can be too close to a problem; so much so, that you can't make sense of what's before you. Stand too close to the television and all you see is a myriad of non-sensical dots. Take a few step back and you have a clearer focus on the image. 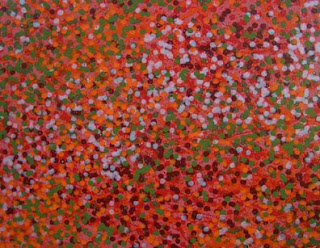 I felt like this recently whilst trying to get to grips with a plot in my second novel, Sugar And Spite. My protagonist was grieving over the sudden death of her husband, and I needed something to trigger the beginning of a slow recovery. (After all, in future chapters she had to find a way to make a living, cope with mysterious anonymous messages which were being sent to her, un-earth secrets, travel to France, discover that her husband wasn't the man she thought he was and of course, a new man would enter her life). I needed my heroine to be strong again and ready to take on an adventure or two.


The trigger to her recovery had to be believable and preferably have a link to her late-husband, so I continued to write, leaving a gap to fill in when I'd eventually had a light-bulb moment; and hoping that my brain hadn't had a permanent power cut. But of course, with my nose pressed up against the problem, I was too close to see straight.

Some weeks later, having a cup of tea in my writing room (and maybe a cheeky biscuit or two), I wondered what would emotionally give me strength and comfort at a time when I might need it. Of course family and friends' support goes without saying, but I needed something which would add a new dimension to my novel.

The light-bulb moment happened - in the form of a squeak!

No, not a mouse, a dog! Turning round, my two faithful spaniels were curled up on the settee. They always keep me company whilst I'm writing and I'm sure they'd much rather sleep on my writing room sofa than in the kitchen overnight!

First I must explain the squeak. Harlyn (the red dog in the photograph) was dreaming - probably of rabbits or squirrels. Her paws were twitching as she ran through treacle in her dream, never quite catching the elusive creature in question. She tends to emit little squeaks as she twitches in her sleep! No doubt in her dreams it's a decisive, no-nonsense bark. 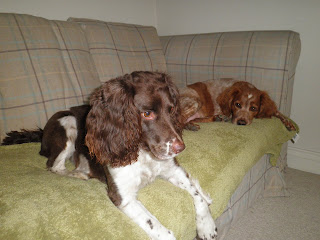 Harlyn and Brook are always full of loyal devotion despite how I'm feeling. If I'm feeling a bit low, a cold wet nose will nuzzle closely or I'll be brought a well-chewed dog toy as a gift. There's nothing better than hugging a soft warm body with fur which smells like sawdust, fresh air and a faint musty smell like opening your grandmother's jewellery box! If I'm frustrated, they'll lift my mood with a dying-fly impersonation, and if I'm laughing, they'll hunker down with bottoms in the air ready to play.

Quite simply - I love them!

A dog is just what my heroine Erin, needed. A little creature to look after and get her out the house. I linked her late-husband into the story by writing that he'd chosen Jet - a totally black Springer puppy - before he'd died. Jet was to have been a surprise for Erin. Of course it had taken weeks before the puppy had been weaned and delivered to the doorstep, which explained the timing.

I'd found my link in the form of a little black ball of fluff!

I've fallen in love:
It came as a bit of a shock when I realised that I'd developed a crush on my hero. But of course I had to take things a stage further - I fell in love with him! I'd wake up and he'd be the first thing I thought of. What would he do/wear/say that day? Sadly it was a one-sided relationship because he had a thing for my protagonist. I should have been jealous, but she'd become a good friend of mine and I was happy for her! Since making friends at writing groups and on Twitter, I now know that it's par for the course for romantic novelists to feel this way about their hero. It certainly helps with the imagination for the raunchier scenes! 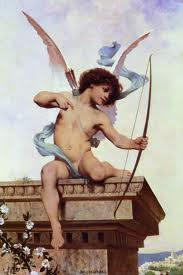 I'm rude:
I think I've become unintentionally rude when speaking with other people. I can now hold a conversation whilst taking little notice of what's being said. I don't mean to be rude, but sometimes my mind is thinking about dialogue between my characters or setting a scene. So whilst I'm nodding and aah-ing, my thoughts are plotting or editing. I apologise now if someone is reading this and remembers a glazed expression on my face whilst we were chatting!
I'm have panda eyes:
I've learned that Touche Eclat is a writer's best friend. Late nights lead to dark semi-circles under the eyes and they'll need a little lightening the following morning. Beauty tip: Don't fall asleep whilst balancing used cold tea-bags on your eyes. I tried it once and dozed off. When I woke up I had two square-shaped stains on my eyes which lasted for a day or two!
I'm mad:
I talk to myself a lot these days. I mull over scenes, dialogue, plots etc but tend to do it more and more out loud. I seem to do it quite a lot whilst driving too, which thankfully hasn't been banned yet!
I have virtual friends:
I've discovered that there are many lovely fellow writers out there. Their support and humour have guided me through writers' block and feelings of low self-literary worth! Our conversations might only take place through the ether, but they are friends nevertheless. I wish we could all live in one big happy supportive community, but I imagine we'd never get any writing done, what with all the coffee drinking and cake-eating we'd be doing!
I'm obsessed:
Why have I become obsessed with notebooks? I love them! Big, small, lined, plain, colourful, embroidered....and as for those with elastic that wraps round them to keep them closed, well I'd give half my last Rolo to get my hands on one. It's great for the family, I'm never disappointed when I receive a notebook as a gift. The ridiculous thing is though, they're too precious to write in. How mad is that?
I'm still obsessed:
In addition to notebooks, I also have a thing for names. Whether they're rolling up in the credits of a television programme, on the side of buses, in magazines or overheard in conversation. These names are prospective character's names. For some reason I'm drawn to four letter names like, Tess, Ruby, Katy or Erin (my latest heroine's name). I'm a Virgo, so maybe it's because they're small and neat that they attract me.
I'm a worm:

After years of happily wandering around the shops and skimming through clothes rails, I now find nothing beats spending an hour in Waterstones. I've morphed into a book worm. Honestly, I could spend hours in there browsing the blurbs and reading the first few pages of novels. I know how important it is to hook the reader in the first few pages so I find it fascinating to see if authors manage to hook me. And Waterstones have a cafe, so I can read whilst eating a blueberry muffin! Does life get any better?
I'm a twit:
Who'd have thought it? I've made a blog and joined Twitter. This may come as second nature to some people, but until I started writing several years ago, I didn't even know how to attach a document to an email! Now I'm up-loading, down-loading, cutting, pasting, attaching, removing, forwarding, backwarding...okay I made that one up! But I think I'm doing alright!