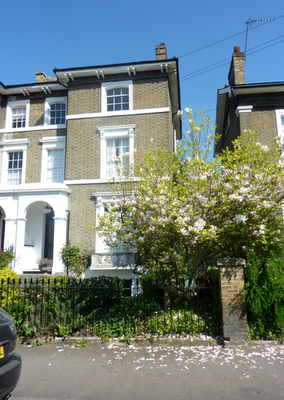 Thank you so much Megan Taylor for choosing me to carry on the 777 challenge. For those of you who don't know about it, writers are invited to share seven sentences from page seven of their work in progress. They then choose seven other writers to do the same.

My second novel, In Hindsight, is almost complete bar a little editing. The seven sentences come from an opening scene where my characters,Rowan and her husband Tom, are viewing a three storey Georgian house in Clapham. They decide to buy the house at auction and name it Magnolia House as it has a magnolia tree heavy with bulbous blossoms decorating the tiny front garden. As I couldn't choose seven sentences but had to take them from page 7, they're not the most exciting of lines, but describe what my characters find as they view a house they're hoping to buy.

Rowan finds herself widowed early on in the story and decides to divide the house into three separate storeys. She takes in two lodgers for company and to help with her finances. In Hindsight is a story about how she claws back from the depths of grief with the help of new friends. But nothing is ever plain-sailing is it? My novel is full of deceit, mystery, friendship, jealousy, an obsessive compulsion, romance and hope.

Tom and Rowan followed the agent into the kitchen where they discovered several cupboard doors hanging from their hinges, exposed pipe-work and an oven which had created its own biosphere of living organisms. Strange amorphous splodges were sprouting fungus and threading their way around each of the gas rings.

They traipsed around tumbledown rooms where ceilings were decorated with damp patches, floorboards were broken and strips of ripped wallpaper hung like clusters of catkins. Although some rooms were in better condition than others, all had retained their ornate cornices, ceiling roses and wide floor boards which shone with an aged patina. On the top floor, the view of roof tops and neighbouring small manicured gardens was amazing. They lingered for five minutes, moving from one sash window to the next, gasping with surprise and pointing out distant landmarks.

‘Look over there. Can you see the church spire?’


Here are the seven writers I've chosen to join in the fun of 777. I look forward to reading all your excerpts!