Broken Bones And Brackets - A Day In My Life

My husband had an accident last week. He's fine. (well, as fine as a man in pain can be.) He could have snapped his humerus and cracked two ribs while sky-diving, climbing Everest or taking part in a parkour challenge.
Actually, he fell off a ladder. Not very glamorous I know, but nonetheless, I'm informed it's just as painful. 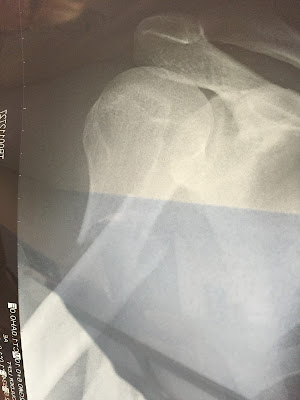 He came home from hospital clutching this impressive x-ray, having been told by the orthopaedic surgeon that he would leave the fracture a week to see what happens! I was intrigued. What might happen? I find myself watching my husband's arm and waiting for some miraculous transformation to take place. Maybe a new arm will sprout; after all, a salamander is capable of regrowing limbs. (I'm not suggesting my husband looks like a lizard, but seeing him sprawled along the settee, I can glimpse a few similarities.) Maybe the bones will realign themselves and fuse back together perfectly (although I'm not holding my breath).

Broken arm aside, I then took my two dogs for a walk on the village green because due to the hospital visit, they'd missed their morning stroll. Brook found a six foot branch for me to play fetch with. I refused, so she thwacked me on the ankles with this tree limb every time she ran past. She doesn't understand that mass x collision = bruises.

The calves hooves were protruding, so I hung about to see what would happen. (A bit like the orthopaedic surgeon's take on life.) Meanwhile a handful of hens had decided to make an entrance (not from the cow) and proceeded to walk in a hen-like manner, onto the field. Luckily I had my Brittany spaniel on a lead because she's the Hannibal Lecter of dogs when it comes to small creatures. My Springer is a wimp. I'm sure she wouldn't mind me calling her that because...well, she's too much of a wimp to disagree with me. She's frightened of the wind. She's frightened of snails. She's frightened of her shadow. Little did I know that my wimp had "grown a pair" (as my daughter so succinctly put it when I returned home). She chased these hens (*sigh* not my daughter), making them squawk and flap while the cow pushed and groaned. I was running around in wellies that were a size too big while trying to catch my Springer. This farce ended with two blushing hens with their butts on show, a dog with a mouthful of feathers and a labouring cow who was now stressed and anxious. 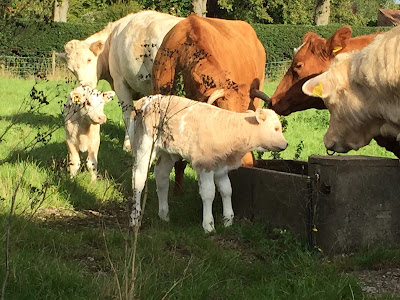 The following day I found a safely-delivered calf.

But we can all learn a lesson from this. That is, where to place your punctuation when using brackets! (Neatly done, if I do say so myself.)

Parentheses are words enclosed in brackets, that clarify information given in a sentence.

Example 1: My spaniel (although usually a wimp), chased the hens. In most cases, punctuation isn't used directly before the opening bracket of a sentence, they are placed after the closing bracket.

Example 2: The orthopaedic surgeon decided to leave Paul's arm broken (for over a week). Because the parenthesis ends the sentence, the full stop is placed after the bracket.