All The Light We Cannot See 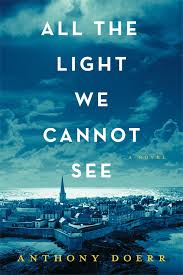 This 523-page novel is a winner of the Pulitzer prize for fiction. The story is set in Paris during World War 2 and its primary focus is about what warfare does to ordinary people, not their leaders. At the age of six, Marie-Laure becomes blind. Her father, who works at the Museum of Natural History, builds her a model of Paris so she is able to navigate her way around the city. The Jardin des Plantes is their favourite place, and here Marie-Laure familiarises herself by counting drain covers and trees and streets, memorising routes and recognising the scents of trees and flowers. But when the Nazis occupy Paris, they're driven from their home.

In a parallel story, Werner, a young orphaned boy in Germany, comes to the notice of the Nazis for his astonishing skill at fixing radios. This leads to his relocation to an elite school aimed at providing skills for the Reich. Young Werner proves his worth and survives, even though the school is brutal and unrelenting. I liked the idea that we see into the minds and feel the emotions of both Germans and French. Some of the Germans are evil but you also come to understand how living in those times shaped you. To stand up against the Nazi regime was almost impossible. There are some who tried in this book, but they didn't succeed.

When the Nazis arrive in Paris they demand the keys from Marie's father and begin to investigate the museum. He makes plans for himself and his daughter to move to his uncle’s house in Saint-Malo. Despite her blindness, Marie is able to visualise the layout of this new town when her father makes another small and detailed model of it.

Months pass and Werner is stationed closer to the front as the Germans want experts who can pick up radio transmissions from the allies. For Marie, life in Saint-Malo becomes increasingly difficult as the Germans take full control. Her father is investigated and taken away, ending up in a German camp. Marie joins the Resistance and carries messages in baguettes. Of course, as I read the dual narrative, I wondered how soon it would be before Marie-Laure and Werner were going to meet.

Through using flash forwards and flash backs, Anthony Doerr's novel follows the course of Marie and Werner's lives as they struggle to find out wether it is possible to truly own your life when it's smothered by the the events of history. Werner is driven by a deep love of science while Marie struggles with life in darkness. Occasionally the sudden changes in the story's timeline were confusing. At times I found myself checking back to see what year I was reading about, but not frequently enough to detract from the story.

This novel is a war story and a coming-of-age story. In the midst of the rise of German fascism and the founding of the French Resistance, how do these two individuals survive? The novel constantly turns between the moral uncertainties of life and the beautiful precision of the natural world; between the political complications of war and the wonders of nature and the human brain.

I found this novel deeply moving but it is Doerr's prose that gave it five stars from me. The descriptions of objects, nature, places, a particular grip of a hand, the movement of a body and the characters' dialogue, are wonderful. I think the overall message for me, having read this book, is that mankind continues to see beauty and good in the world, despite experiencing harrowing, devastating and cruel situations.

'December sucks light from the castle. The sun hardly clears the horizon before sinking away. Snow falls once, twice, then stays locked over the lawns. Has Werner ever seen snow this white, snow that was not fouled immediately with ash and coal dust? The only emissaries from the outside world are the occasional songbird who lands in the lindens beyond the quadrangle, blown away by distant storm,or battle, or both...'
Posted by Angela Barton at 04:02 4 comments: