It's may be against her will, but a sudden realisation that she's a collaborator, shocks Matilde. Things are going to change... 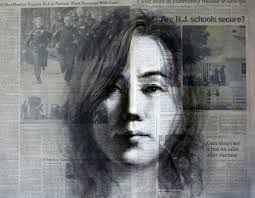 Later that day, Matilde had been ordered to leave work early due to a last minute visit by a high-ranking member of the Gestapo. She supposed they didn’t want the possibility of a Parisian eavesdropping on their secret plans; and that was fine by her. She’d much rather escape the claustrophobic atmosphere of the museum’s basement and the hostile eyes of Herr Meyer.
Outside the sky was the colour of watered-down milk and a breeze carried scents of woodsmoke and rotting leaves. Before the war Matilde had loved autumn with its glow of streetlights reflecting on rain-drenched boulevards and the promise of Christmas; but now Paris appeared insipid and dirty. Windows wore a coat of neglect and paintwork was dulled with grime. Even the railings of the Tuileries reminded her of ribs instead of ornate metalwork. Perhaps this time next year the war would be over. Maybe festive lights would illuminate the avenues with colour once again.
Matilde wrapped her coat tightly around her body and hurried home with thoughts of Xavier and hot onion soup cheering her mood. But as she approached the entrance to the Vue du Jardin, she slowed her pace. Across the road, saw a French gendarme salute a German officer with submissive servility. Stiff and mechanical - already infused with German traits. It hadn’t taken that Frenchman long to surrender. With her next breath, a creeping realization made her stop and clutch a railing. Who was she to condemn this French policeman? Didn’t she work for the Germans? She was as bad as him. Yes, it was against her will, but she was still collaborating. France must fight back. She would fight back. If everyone relied on each other to retaliate, nothing would change. France would willingly succumb to the enemy, one person at a time. She vowed to support Xavier more actively from now on.
A shout. Her head shot up. Sharp, guttural commands were being barked nearby. The sound of an engine grew louder. She pressed her back against the railings. A truck sped past and braked sharply outside the entrance door to the building where she lived. Raised voices echoed inside the doorway. Matilde’s breath came in gasps and she could feel her heart thumping as she pressed her knuckles to her lips. The French policeman and the German officer ran across the road towards the noise. So, their meeting hadn’t been a coincidence; they were working alongside each other. She stayed where she was, partly hidden behind a large evergreen shrub and skeletal branches of an arched tree that hung over the metal fencing. What was happening inside the Vue du Jardin? Had someone run inside the building to hide and had been discovered?
She watched wide-eyed as several Germans scuffled with a man. They’d found who they were looking for. The man was hunched forwards. He stumbled despite being grasped by uniformed men. They dragged him to his feet. Blood covered his shirt. The French policeman opened the back door to the truck. Traitor! The prisoner gave one final attempt to retaliate and as he did so, he raised his head.
Xavier!