Message From A Blue Jay written by Faye Rapoport DesPres 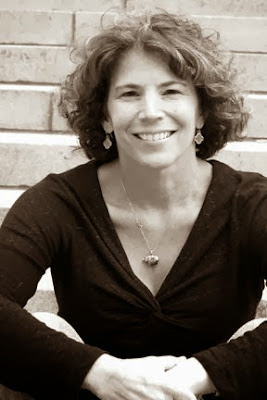 I'm delighted to introduce Faye, my online friend and fellow member of Writers' Coffee Bar on twitter. WCB is a virtual cocktail bar/sunny porch/coffee house - where a small group of writers share coffee and news or toast each other's successes with a glass full of bubbles. Today we're celebrating Faye's recent publication success and in this post I ask a few questions about her writing in general and her book, Message From A Blue Jay.

Faye Rapoport DesPres is the author of the new memoir in essays titled Message from a Blue Jay (Buddhapuss Ink, May 2014). Faye was born in New York City and raised in upstate New York, and she has also lived in Colorado, England, and Israel. Her personal essays, fiction, poetry, reviews, and interviews have appeared in a variety of literary journals and magazines including Ascent, Connotation Press: An Online Artifact, Fourth Genre, Platte Valley Review, Superstition Review, and the Writer's Chronicle. Faye earned her MFA from the Solstice Creative Writing Program at Pine Manor College.

What made you choose the title of your book?
Message from a Blue Jay, the title of the book, is also the title of a chapter that was originally written as a stand-alone personal essay. For a number of reasons that I think become clear as you read the book, that one particular essay really captures one of the over-arching “themes” that I found myself exploring as I wrote these essays. Also, many of the chapters/essays in the book feature birds, or at least mention them, as well as other animals. I’ve always felt that the natural world and the creatures that inhabit it have some important messages to relay to us – if we’re willing to pay attention and listen.

Can you condense your book into a short paragraph for us?
That’s tough! I’ll give it a try. Just before I turned forty, I began to take stock of things and examine why, for many years, I hadn’t been able to stay in one place for very long or find what I considered real “happiness.” From that point, from that moment near the beginning of the book when I was sitting in the backyard of a rented house in Boulder, Colorado, thinking about life and staring at the sky, I began a journey that led backward and forward at the same time. I re-visited certain events in my life by examining them through my writing and traveling back to a number of places where I’d lived (including London, by the way). By doing this, by taking stock of the past and opening my eyes to the world around me, I was able to finally come to some conclusions about life that helped me move forward – not just my life, but life in general. Along the way I met and interacted with a number of interesting people who have roles in the book, including the man I married. I also came in contact with some amazing animals. I didn’t necessarily intend to take this journey; life just happened that way. The book is a combination of stories from that journey and reflections on the meaning I pulled out of them. It all happened during the transitional time many of us go through during what I call our “middle decade.” But I hope it’s a good read for anyone!

What phrase in your book are you most proud of?
There are a few, but the first one that comes to mind is this one, although it is more effective and makes more sense in context: “How I crave a sip of my own gentleness.”
What was the most difficult part about writing your book?
There were a lot of difficult parts! I worked on the essays that became chapters of this book for a long time, and it was challenging to get each one “right.” Maybe the most difficult part of completing this book was continuing to write and press forward in the face of the usual rejections writers face when submitting to literary journals (quite a few – but not all – of the chapters in the book were originally published in literary journals). I find that it’s hard to believe in yourself and your work in the face of rejection, and to keep writing. One of the best chapters in the book (at least I think it is, and many of my readers have agreed) was never accepted by a literary journal as a stand-alone piece, although it came close a few times. I decided to believe in it anyway.

What is a typical writing day for you? When and where do you write?
That has changed over time. Unfortunately, I don’t have the luxury of focusing solely on my creative writing – I wish I did! I am also a freelance writer and editor and an adjunct professor of English at Lasell College in the Boston area. During the writing of Message of a Blue Jay, before I started teaching, I often packed up my laptop and drove to a local coffee shop to do my freelance work and write in the mornings for about four hours. I also went through a phase where I woke up early and wrote from 5:00 to 7:00 in the morning every day. At that time, I wrote in the den of our house. This year, since finishing Blue Jay and another, very different fiction manuscript, life has been more difficult – my father is ill and I’ve been driving home to upstate New York (a two-plus hour ride from the Boston area, where I live) every other weekend to see him. I also had more teaching responsibilities during the spring semester that ended in early May. I still got up early and sat at my writing desk on most days, even if I only sat there long enough to edit a few sentences or a paragraph. On some days, though, I just had to give myself a break and focus on my other responsibilities. Now that the semester is over, I look forward to getting back to the desk more regularly and focusing on new writing projects.

What did you edit out of your book?
When I initially finished and sent out the manuscript, the chapters were ordered differently than they are in the published book, and a couple of essays were included that didn’t contribute to the narrative as well as the others. In fact, there wasn’t really a clear narrative at all; the book worked more as a collection of individual essays. Thanks to the advice of a couple of editors who read the manuscript, I re-ordered the essays so that they had more of a narrative arc with a clearer sense of revelation at the end – the book now works more as a story, or a “memoir-in-essays.” To do that, I had to edit some of the essays in a different way. I took out repetitive information (for example, introducing the same character twice in different chapters) and I also removed a couple of complete essays. I kept certain themes in mind as I chose what would stay and what would go. I then wrote and added some new work to round out the narrative and create something that worked much better as a whole.

What is your next writing project?
I just finished a very different book manuscript, much lighter fiction, for fun. Now I’m back at work on some new personal essays. I hope to slowly build another collection over the next few years (personal essays take time!) and to write more fiction in the meantime.
Thank you for these great questions, Ange, and for featuring Message from a Blue Jay on your blog. I really appreciate it, and I hope some of your readers will be inspired to check out the book! 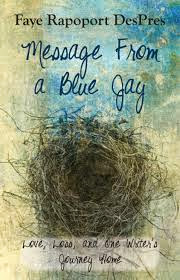 This was the fifth stop on Faye Rapoport DesPres's Virtual Book Tour.
Don't miss the next stop on 5/21 at Perennial Pasttimes!
The publisher is offering a personalized, signed copy of Message from a Blue Jay plus swag to the winner of their Virtual Tour Giveaway.
We invite you to leave a comment below to enter.
For more chances to enter, please visit the Buddhapuss Ink or Message from a Blue Jay Facebook pages and click on the Giveaway Tab!

If I could offer only one tip for aspiring writers, joining a writing group would be it! 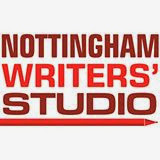 Last year for a special wedding anniversary, my husband Paul gave me the best gift I’ve ever received – a writing room. This is my space - a place where I create my stories, where characters are conceived and storylines are unearthed; sometimes by me but usually by my characters. And although the concepts of my novels take root in my small garden room, the stories grow and mature thanks to the fiction group I attend at Nottingham Writers’ Studio.

Ten years ago when my children had reached their teens, my characters began to pester me, urging me to tell their stories. They disturbed my sleep with their incessant interruptions until I decided to take writing more seriously and do as they were telling me. Nowadays it’s not a matter of writing a book, looking for a publisher and bingo – you’re an author! Those days have long since vanished. Today, would-be writers must work hard to help themselves, both in developing their writing skills and by helping to publicise their writing.

No matter how easily imagination comes to someone, writing needs to be honed and polished, grammar needs to be correct, a story arc needs to flow through your story and an agent won’t even read a manuscript if the layout of your page isn’t correct. Over the years I’ve tried to accomplish these criteria in many and varied ways. I’ve visited Harper Collins in London where I took part in a master class in creative writing. I’ve listened to published authors speak at literary festivals and at Nottingham Writers’ Studio. I’ve spoken with Jonathon Lloyd of Curtis Brown Literary Agency about women’s fiction and listened to writers at annual London Book Fairs. I read ‘how-to’ books, started my own blog and joined twitter where I‘ve made friends with writers, book-lovers, agents and publishers. (And even met a few for coffee and cake). I read a lot and enter competitions, some of which give feed-back on my entries - and as my confidence grew I began to win competitions for prose, poetry and novel writing; proudly accepting trophies and a beautiful silver rose bowl.

If I had to choose one thing which has helped my efforts in becoming a writer, it would have to be joining Nottingham Writers’ Studio. The studio not only offers friendships with like-minded people, a peaceful space to work in, social evenings and now an annual literary event called Nottingham Festival of Words, it also offers workshops. I’ve attended several of these varying from learning how to increase my presence as a writer online, novel-building and authentic dialogue. I’m also a member of one of the studio’s fiction critique groups. These are smaller sub-groups who meet monthly to submit a chapter or piece of work to be critiqued by other members. As we keep the groups fairly small, our fiction group has six members, each person’s work regularly receives feedback. Every time I edit my work having listened to my fiction group’s comments, my writing feels more polished and much improved. I don’t change everything suggested because some interpretations are down to personal taste, but generally I agree with their positive criticisms.

After all, where else would I find a group of people who understood why I could happily spend a whole day in Waterstones' or browsing amongst notebooks and pens for hours on end!