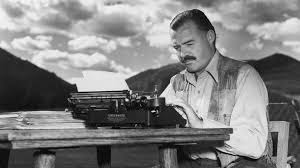 It was Ernest Hemingway who said that writers should develop a built-in bullsh*t detector. Perhaps because he knew that readers have their own BS indicators. They can tell when writers are either winging it or finding convenient ways for protagonists to escape from hardships. For example, your hero wins the lottery which sorts out all his financial problems, or somebody else steps in to give your characters a hand. Readers have to feel satisfied and although they don’t have to believe the story really happened, they do need to believe it could have happened. Planning and research for fiction is paramount; here are a few thoughts on the subject.

1) There's no such thing as too much research. In the military, it's often said that time spent gathering intelligence is seldom wasted. The same concept applies when writing a novel. You never know what little detail will give a scene the ring of authenticity. I've been researching about life in Paris during WW2. Only yesterday I discovered that the glass covers on street lamps were painted blue in order to aid the blackout. Adding these little pieces of information takes a reader deeper into a storyline and the world you're creating.

2) All writers are told to write about what they know. (I agree with this to a certain extent, but I do believe imagination is a fantastic tool for any writer.) Experience is often the purest form of research. I've visited Paris several times, so describing buildings, street scenes and French customs makes conveying them in my book, more accurate. Things you’ve done in life can enrich your writing in surprising ways, even if your characters aren’t doing those same things.

3) You can do research on the cheap. If you can’t travel abroad, you can pick up the phone and ask questions. What's the worst that can happen? They hang up. Then you just call somebody else. It's amazing the number of people who are more than happy to answer your questions. You can visit a museums, museums' website or libraries. Develop an eye for small details. These details aren't padding your story, they're enhancing it.

4) You can find anything on the internet. I've watched some wonderful reels of film from the Pathé News archives. These collections of news films and movies are fully digitised and available online. To actually see the invading German army marching down the Avenue des Champs-Élysées as it occupies Paris, makes writing about it, incredibly realistic and richer for the description.

5) You can find information or ideas from anywhere. You’re a writer, so keep something to record your thoughts close by, be it the good old pen and paper, or like I do, use the notes app on your phone. You might get an idea from a news story on television, a song on the radio, or just need to record a thought that occurs to you. I watched a film last night and wrote down a line from the theme song. I liked the words. I thought that perhaps it could be changed to be a book title or perhaps something one of my characters could say. Of course no one wants accusations of plagiarism, so build on an idea or change the wording.

6) You can use your senses. During the war, the citizens of France ate meagre, tasteless rations; as did the rest of Europe. We've all eaten bland cabbage occasionally and I'm sure we could all find a few choice words to describe it! We all know the smell of bonfires and garlic. The sight of blood and devastation. The sound of waves, thunder and gunfire. We've all felt the hug from a loved one and know how it feels to miss someone. As you write a scene, include your character's senses and you'll add more depth to your scene and make your writing sound more authentic.

7) Avoid information dumps. As my grandmother used to say, 'Don't over-egg the pudding.' As vital as research is, you’ll find more material than you need and no reader wants a history lesson. In my own writing, I could bore you to death with the details of aircraft, weapons, German uniforms, curfews, ways of sabotaging German vehicles and methods of Gestapo torture. Sometimes less is more. Let the reader use some of their imagination after you've given a taste of what's happening.

I started my blog post with a literary quote so I’ll end it with another. Ezra Pound, the American poet and critic (and Hemingway's friend) said that literature is 'news that stays news'. He believed that a novelist has almost the same obligation for accuracy as a news writer. Writers' fictional worlds must ring true. Even fantasy writers can't completely escape reality; the old Star Trek episodes sometimes referred to real science, which made them more believable within their context. Though we invent stories that didn’t really happen, we must drape them over a framework of real-life facts.